The smartphone for the kitchen 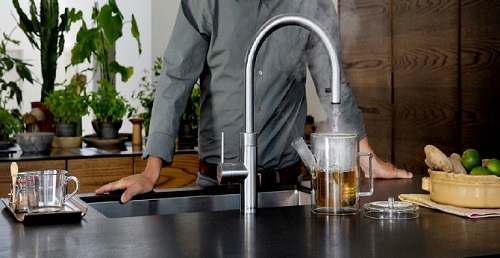 Modern technology is taking over, and the kitchen is no exception when it comes to the modern conveniences of the future.

Once a big trend in the workplace but now hugely favourable in the home is the boiling water tap.

My opinion? Everyone should have one. They change your life.

I know what you’re thinking, its only £30 for a decent kettle so why on earth would you spend 500 pounds plus on a boiling water tap. Well, they’re like the smartphone for the kitchen. You don’t need one. A Nokia will work just fine, but how many of us would go back to that black and white telephone now we’ve experienced how much easier life can be with our smartphone?

These taps dispense boiling water at up to 100 degrees as well as the cold and warm water of your average tap all at the slide of a button. Options can also include filtered cold water and also sparkling water.  Whether you are boiling vegetables, making a brew, filling your hot water bottle or cleaning, the boiling water is instant. It’s a game changer for first-time parents when it comes to making up those midnight bottles!

My personal favourite and the one I have installed in my own home is the Quooker Tap. They’re neither the cheapest nor the most expensive on the market, but they’re the best quality. They’re good value for what you get, and the backup service is great.

These taps are also energy efficient because the boiling water is stored in a tank in a vacuum under pressure. Saving time and helping the planet – no brainer.

Gone are the days of waiting for the kettle to boil, it’s quite literally boiling water on tap.